A Reverse-Retrospective: Places that I’m looking forward to visiting in 2021

With all the closures and travel restrictions in place during last year, there are so many places that I wanted to visit, but wasn’t able to. So rather than a look back at last year (with so much trauma and negativity), I’m going to look forward (and positively) to where I’ll be able to go this year as lockdown eases, and travel becomes possible again. There are so many places in Europe and across the world that I want to go, but I’m going to limit myself to the Netherlands at the moment, places just a few hours drive or train journey from where I live.

Besides wanting to take a full spa day (saunas, pools, jacuzzi, herbal pool, ice room, steam room, caldarium, etc. and with massage, mud packing, food and fruit juices and all the trimmings), there are a number of sites and locations in the Netherlands that are on my post-covid list of places that I really want to visit. Not in any particular order, but here are a few of those places. 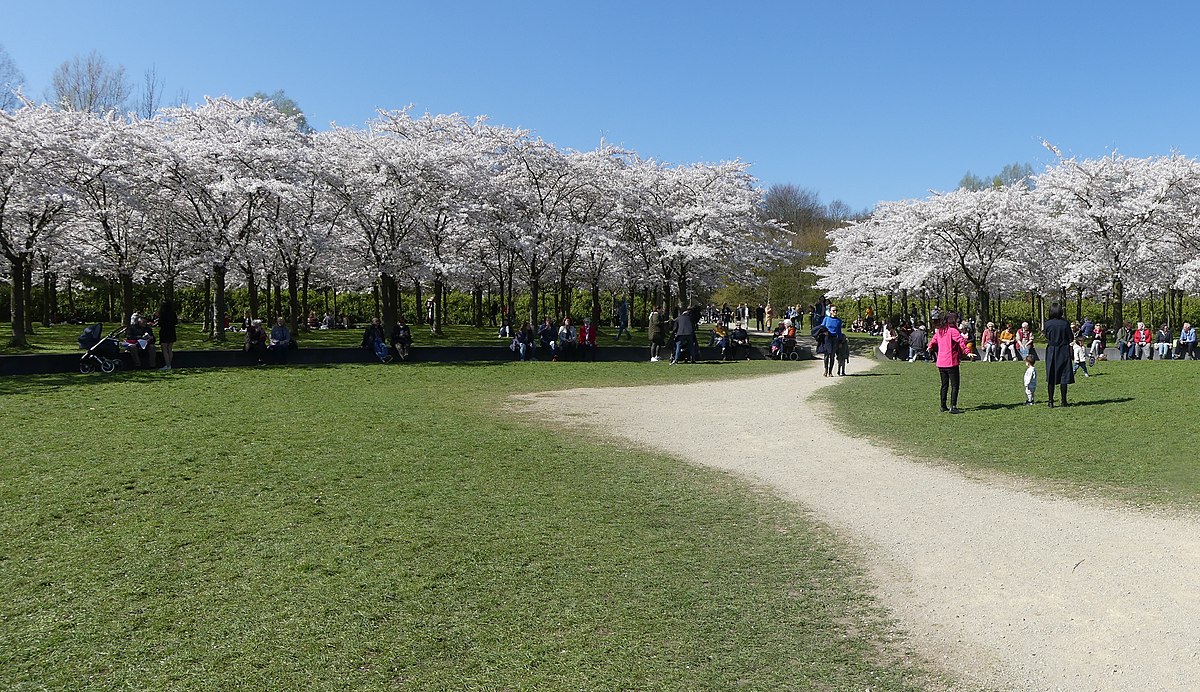 Kersenbloesempark (Cherry Blossom Park) is a corner of the Amsterdamse Bos that is filled with 400 yoshino cherry trees that are filled with blossom in the Spring. It was open last year, but so crowded with visitors desperate to get out of their homes during first lockdown and ignoring social distancing rules, that it didn’t feel safe going there. Sadly, that may well be the case again this year.

Fortunately Amsterdamse Bos is large enough to go walking and to maintain social distancing (there are parts of the park where you can find yourself completely alone for long stretches), and it’s all beautiful; but that small corner with the Cherry trees when they’re in full blossom is especially lovely.

The Keukenhof is near Lisse in Zuid Holland, and in the very centre of the bulb growing region of the Netherlands. With more than 7 million bulbs planted in the Keukenhof Gardens during the Autumn, the gardens are absolutely spectacular in the Spring months. I enjoyed a visit there 2 years ago; but last year it was closed to the public, and (sadly) I think restrictions will still be in place when it’s at its finest this Spring. 😦 But last year they provided a virtual tour of the gardens, and I’m hoping that they will do the same again this year.

A theme park in Kaatsheuvel, Noord Brabant. The attractions reflect elements from ancient myths and legends, fairy tales, fables, and folklore. The original designs from the early 1950s were by the artist Anton Pieck, and his style (grim and dark, but also romantic and nostalgic) has provided the basis for all subsequent expansions or changes to the park. Day or night it looks spectacular, and has seasonally themed events throughout the year, so one visit probably isn’t enough. 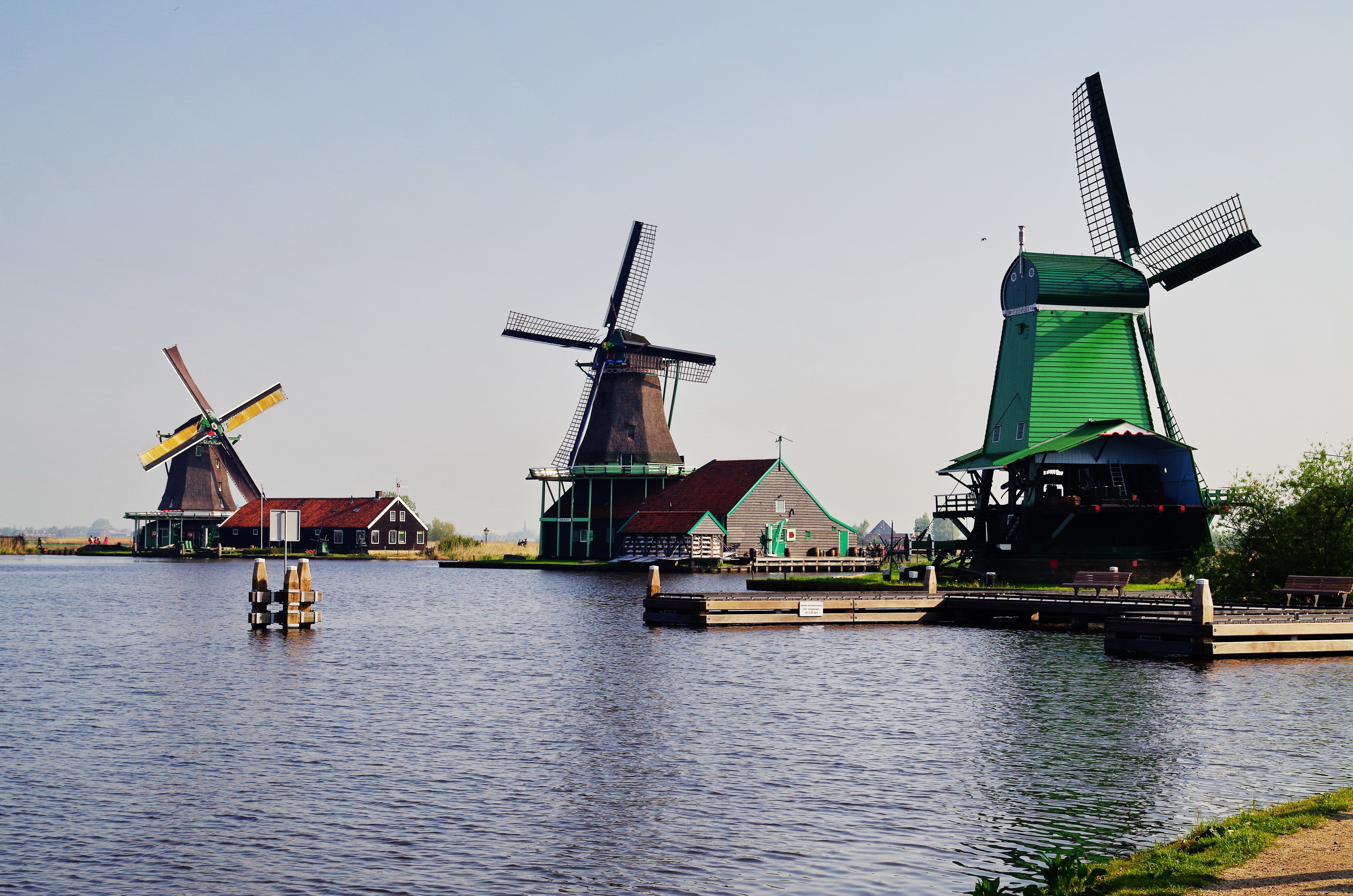 A district of Zaandaam, Noord Holland, that is famous for its collection of historic windmills and buildings that were brought to the district from all over the region in the 1960s and 70s, and also hosts seven museums covering traditional crafts like weaving and cooperage. It sounds like a great way to discover what life was like for the Netherlands in the last century.

The Afsluitdijk is a causeway and dam that runs from Den Oever in Noord Holland to the village of Zurich in Friesland, and carrying the A7 motorway for 32 kilometres (20 miles). It separates the Zuiderzee (now the IJsselmeer) from the North Sea/Wadden Sea, and took 7 years to build in the 1920s and 30s. At both ends of the dike, there are also complexes of shipping locks and a total of 25 discharge sluices. As part of the Zuiderzee Works, it has been declared one of the Seven Wonders of the Modern World by the American Society of Civil Engineers. 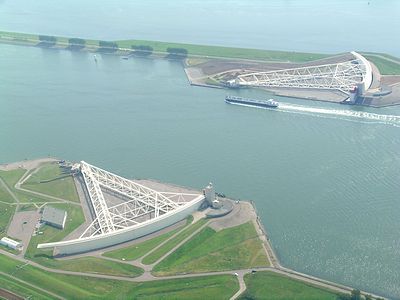 DeltaWorks is a series of construction projects in the southwest of the Netherlands, designed to protect the land around the Rhine-Meuse-Scheldt delta from the sea, and comprises a series of dams, sluices, locks, dykes, levees, and storm surge barriers in the area between Zuid Holland and Zeeland. Like the Zuiderzee Works, it has also been declared one of the Seven Wonders of the Modern World by the American Society of Civil Engineers.

Biesbosch (‘forest of sedges’) is a large network of rivers and smaller and larger creeks with islands; and is a large national park near Dordrecht in Zuid Holland. It is also one of the last extensive areas of freshwater tidal wetlands in Northwestern Europe, making it an important wetland area for waterfowl.

Kamp Westerbork was a transit camp in Drenthe province, and used as a staging ground for the deportation of Jews to the concentration camps during World War II. Following the war, Westerbork was first used as a remand prison for alleged and accused Nazi collaborators, and later housed Dutch nationals who fled the former Dutch East Indies (Indonesia). Since then, the camp has been almost completely removed, and the Westerbork Synthesis Radio Telescope built on the site; but a museum has been set up nearby to keep the memories of those imprisoned in the camp alive, and as a tribute to those inmates who had died after deportation. The 102,000 stones memorial has a stone for everybody that transitioned through the camp to die in the death camps. 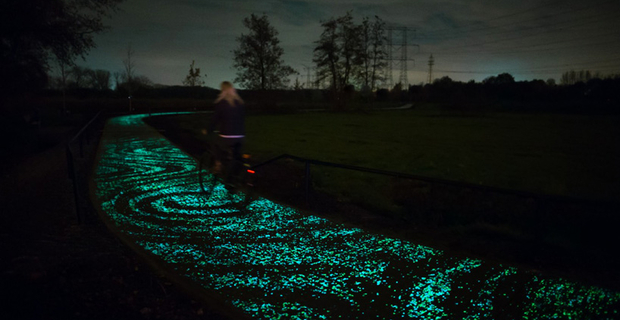 Created in 2014, the Van Gogh Cycling Path at Eindhoven in Noord Brabant is a 600m stretch of cycle path covered with luminous stones. These charge up during the day and emit light in the evening; and are designed in a pattern inspired by the Van Gogh’s famous painting ‘Starry Night’. 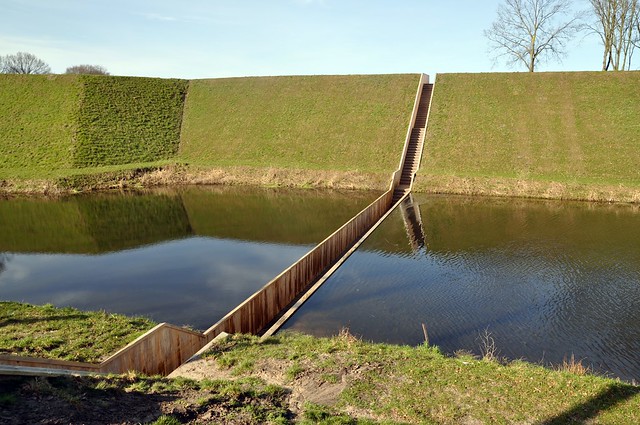 Fort de Roovere is a 17th century fortress near Halsteren in Noord Brabant. Renovated as a tourist attaction over the last 10 years, a bridge across the moat was considered “disrespectful” of its purpose, so a submerged bridge, nicknamed “the Moses Bridge”, was designed instead. 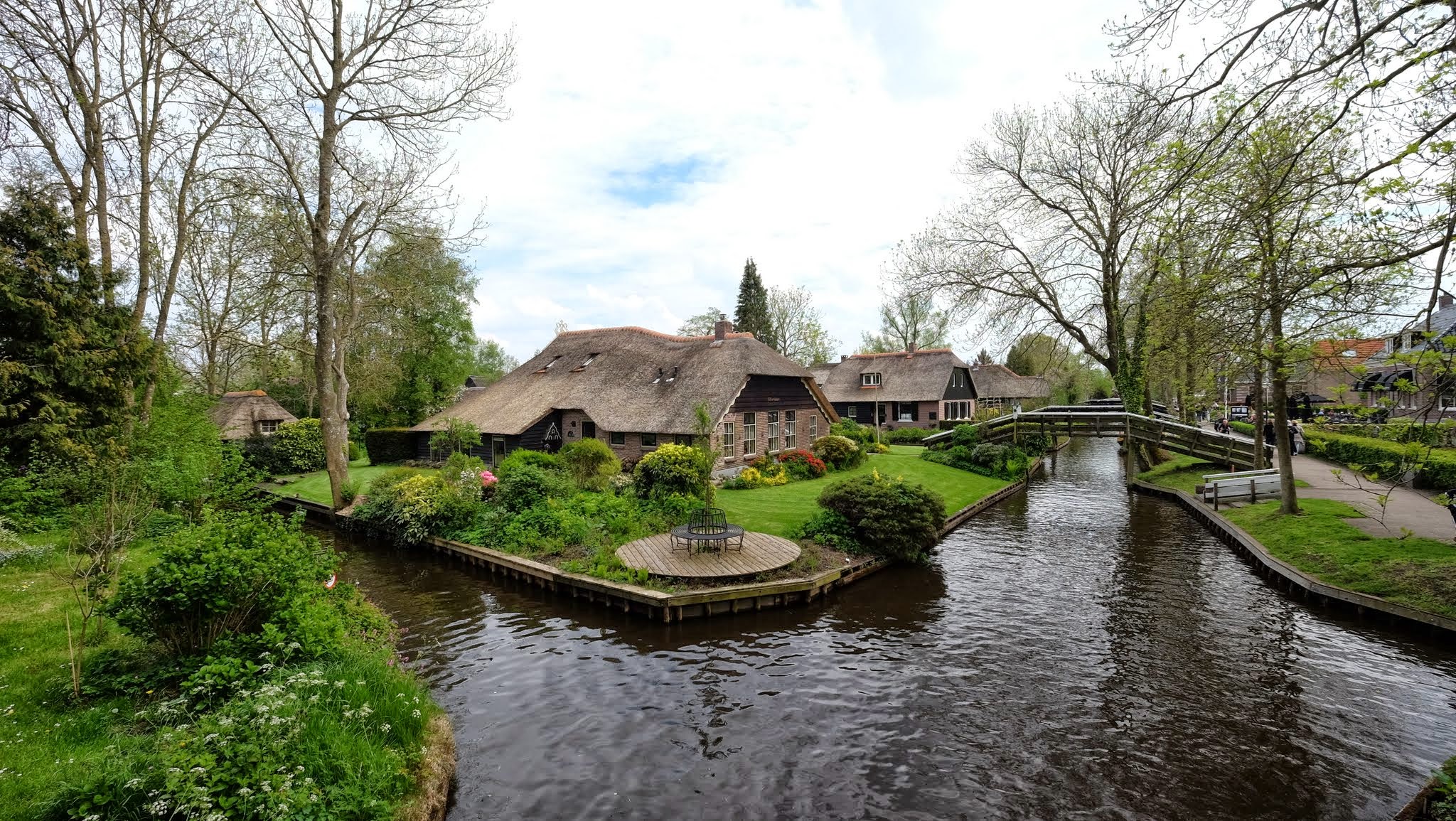 A village in Overijssel without any roads (at least in the old part of the village), and that you can only see on foot, by bicycle (since a cycle path was built recently), or from the canals. It does look to be a beautiful picturesque village, and worth visiting for that alone; but the excitement seems to be watching all the tourists who can’t navigate a boat bumping into each other in the canals. 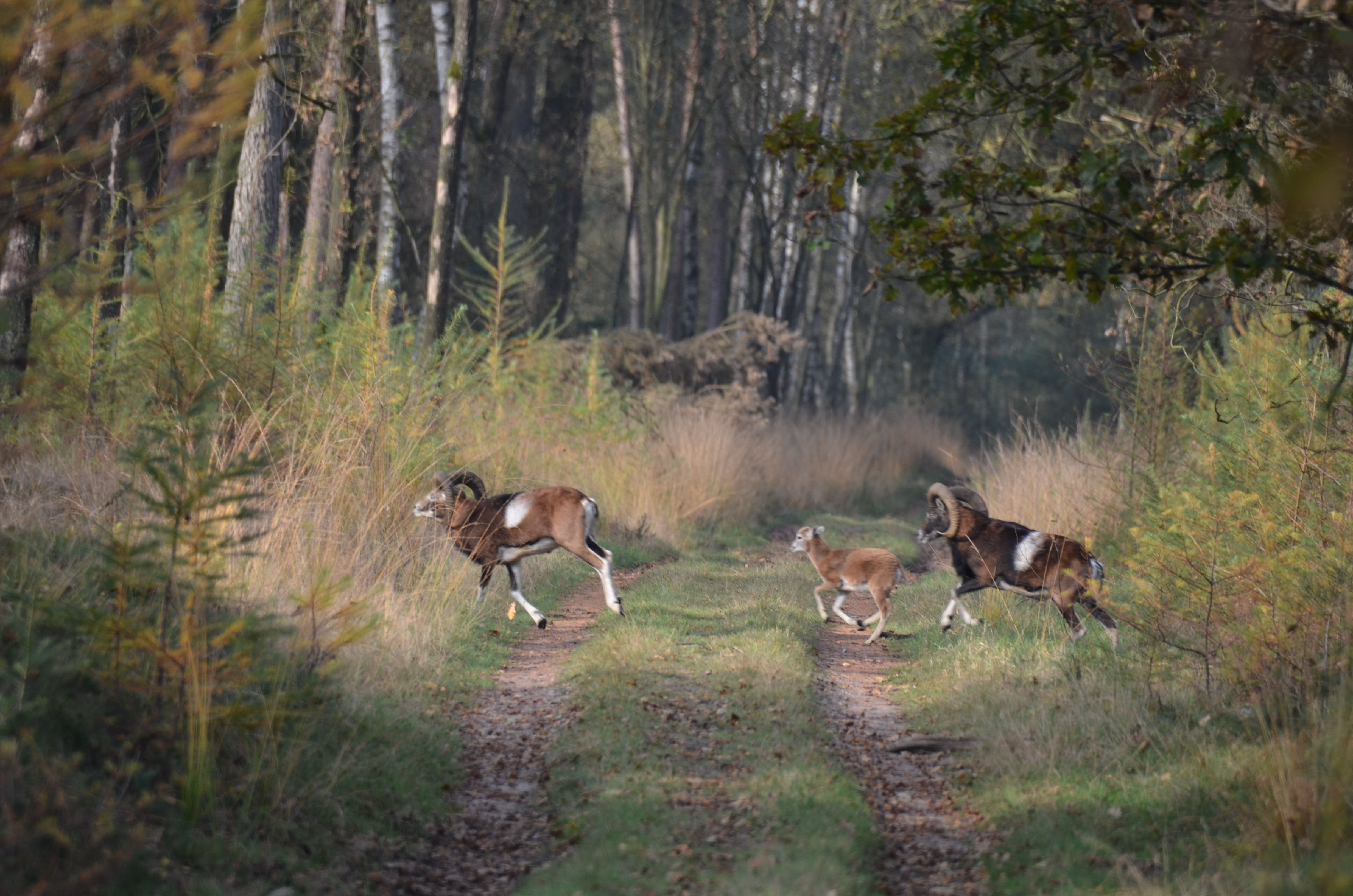 A former hunting estate consisting of heathlands, sand dunes, and woodlands in the province of Gelderland, this is a national park even though it is still privately owned, and there is a charge to visit. Besides the park with its deer, wild boar and mouflons, there are also two museums; one devoted the the geology, flora and fauna of the estate; the second an art museum with works by Rodin, van Gogh, Seurat, Piet Mondrian and Picasso among others. 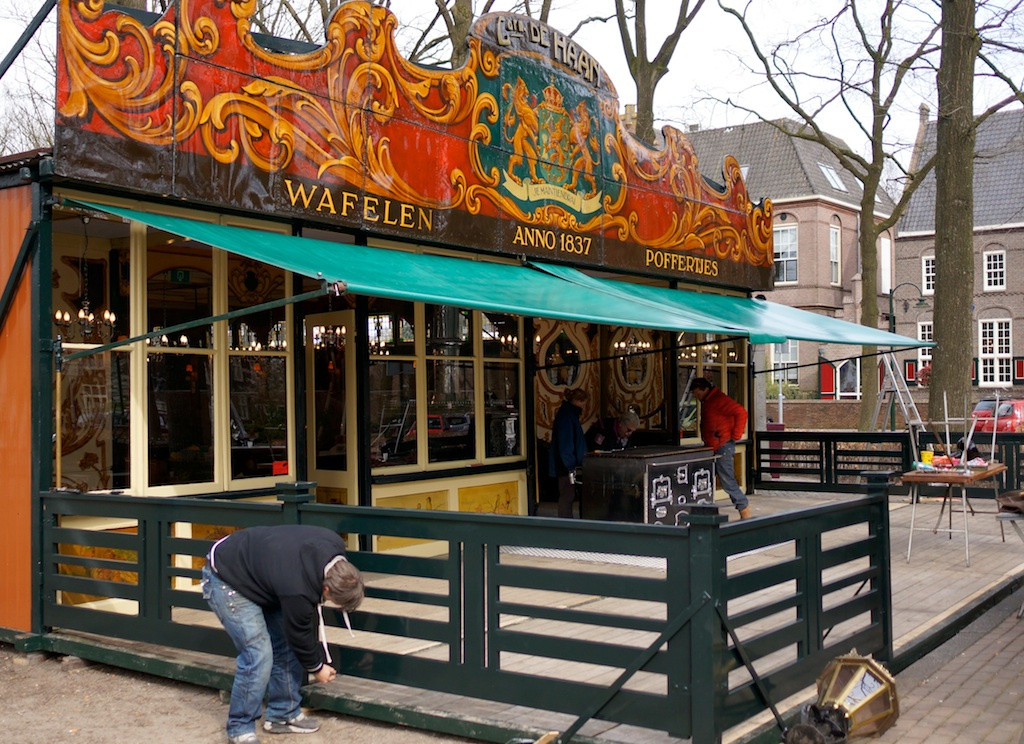 A small village with some very lovely (and expensive) properties near Hilversum, the village green in Laren is home to Poffertjeskraam de Haan, with really delicious poffertjes.

This 16th century fortress at Bourtange in Groningen is built in the traditional 5-pointed star shape common to many of the fortifications in the Netherlands. Restored in the 1960’s, it has now been converted into a historical museum.

Like Loading...
This entry was posted in Uncategorized and tagged netherlands, places to visit. Bookmark the permalink.

1 Response to A Reverse-Retrospective: Places that I’m looking forward to visiting in 2021